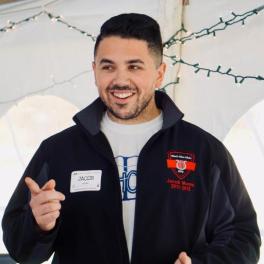 Jacob Moore was a member of The Ohio State University Men's Glee Club from 2011–2015, during which time he sang in the Tenor 1 section and served as the Vice President during the 2013–2014 school year. During his time at Ohio State he received both the Outstanding Student Teacher and the Undergraduate Achievement in Conducting & Ensembles Awards at the School of Music's annual Honors Convocation. He was also a semi-finalist in the American Choral Director Association's (ACDA) National Conducting Competition in 2015 in Salt Lake City, Utah. He graduated with a Bachelor of Music Education in 2015.

Since Jacob's graduation, he has served as director of choirs at Hudson High School (Hudson, Ohio), and in 2021 he earned a Master of Music in Choral Conducting at Michigan State University.

Jacob tries to instill the love and passion for music in his students just as it was instilled in him as an MGC member, while always remembering and following the rules of the MGC, especially Rule #4.