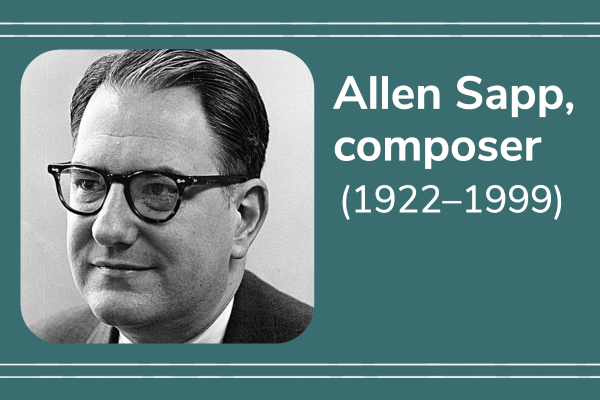 Come join us for the beginning of the centennial year celebration of Allen Sapp (1922–1999), one of Ohio’s most notable composers. Sapp was a student of Aaron Copland, Walter Piston and Nadia Boulanger, and began his career on the faculty of Harvard University in the 1950s. In 1978 he was named Dean of the University of Cincinnati College–Conservatory of Music, and served as professor of composition there through the remainder of his career. The composer of more than 140 works in a wide variety of genres, his compositions were performed by distinguished musicians and orchestras worldwide.

A reception will follow the concert, with the opportunity to meet the musicians, as well as family and former students of Allen Sapp.

This concert is produced by Alan Green, Professor and Head of the Music & Dance Library. Green is the author of Allen Sapp: A Bio-Bibliography and prepared the critical editions that will be used in this performance.

This event is free and open to the public.

The Timashev Recital Hall is located on the ground floor, at the far north end of the building.